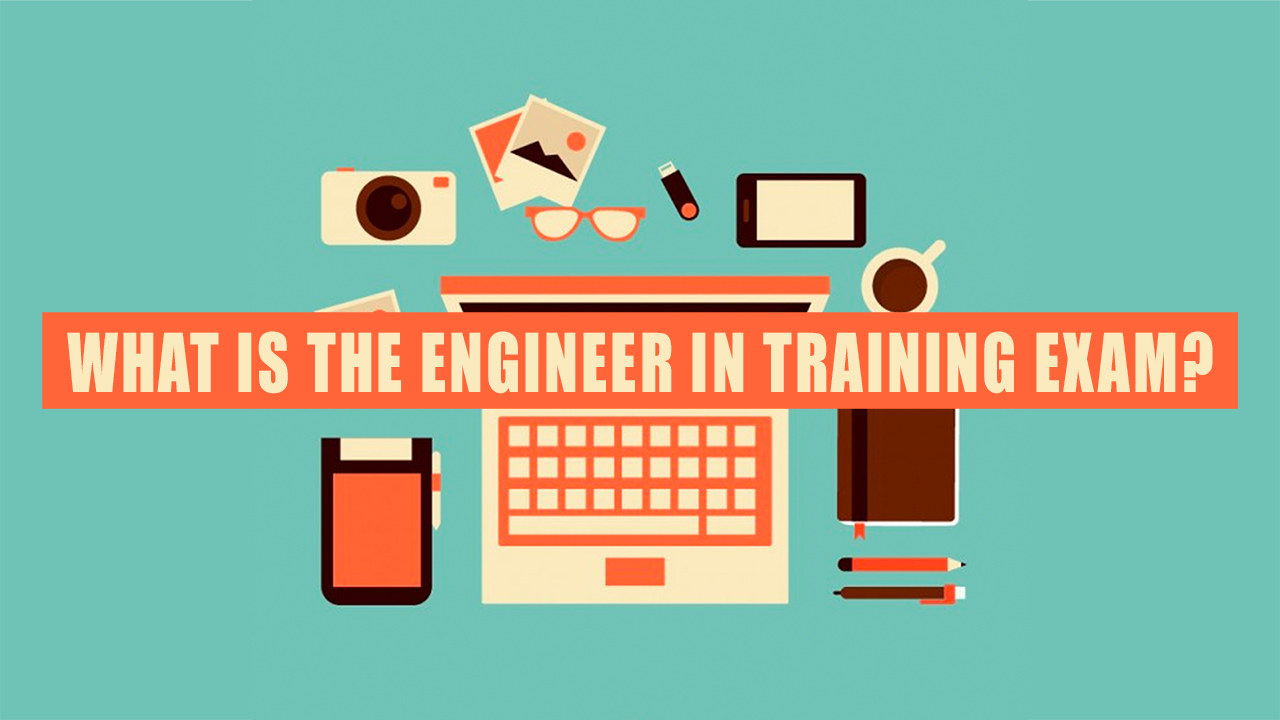 So what is the Engineer In Training Exam anyways?

I’ll admit, coming out of college I hadn’t a clue, not even an inkling, that the FE Exam even existed.

Unless it was being murmured in some secret society that I wasn’t part of, I never even heard the term Engineer In Training Exam behind them university walls.

Ya, slightly absurd and borderline incognizant considering what I do nowadays for a living.

But I am just being real.

And I have come to realize over the years that this is the case for many.

Maybe this resonates a bit with you?

If so, don’t be ashamed…I was in your same shoes.

For me, it wasn’t until I started seeing those around me flexing their newly acquired EI or EIT credentials that I realized:

Hey, there may be something I am missing.

And missing I was.

I was really late to the game, most definitely, but once I wrapped my head around the whole process of becoming a Professional Engineer, it was game on.

There are a ton of benefits that come with getting your PE license, and to be truthful, why one wouldn’t want to become a PE after going through what we go through to get our degree is beyond me.

But that’s not you, I get it, you just need to know what the heck it is…so let’s just start right where we are.

What is the Engineer In Training Exam?

The Engineer in Training Exam (EIT Exam) is the first of two exams you will take as you progress towards acquiring your Professional Engineering License (PE).

This exam, which you will hear more formally referred to as the Fundamentals of Engineering exam (FE Exam), is developed for universal distribution in all states (and a number of locations outside the US) by the National Council of Examiners for Engineering and Surveying (NCEES).

The FE Exam is offered to eligible students year-round in four different testing windows, they are:

An individual is allowed to take the exam once per testing window, but not more than 3 times in a 12 month period from the date of the individual’s first attempt.

Although eligibility requirements are unique to each state’s engineering board, generally speaking, if you are either graduated from, or in your final year of an ABET accredited program, then you should be good to get at it.

If you are unsure of whether or not your program is ABET accredited, you can do a quick search here:

If your degree is not ABET accredited, don’t worry, remember, eligibility requirements are set state by state and typically have a series of eligibility scenarios that include combining both non-ABET accredited degrees with progressive engineering work experience.

You can get more details about your particular state’s eligibility requirements here:

The Engineer In Training Exam is computer based test that spans 5 hours and 20 minutes in length.

I know what you are thinking…

Ugh, I swore the day I walked across that stage to grab my diploma I would never take another test

But it is what it is…let’s just grunt this one last (ahem, two) exams out and we can call it good.

So the FE Exam has 110 questions divided in to two sections covering a variety of subject material depending on the exam specification that you choose to focus on.

Speaking of exam specifications, the FE Exam is offered in seven disciplines (Mechanical, Civil, Electrical, etc) though here at Prepineer, we build around the strategy of focusing all of our students on preparing for what is termed the “Other Disciplines Exam”.

Tthe “Other Disciplines Exam” is a standalone specification and a strategy many don’t even consider, or even know is an option, and because it has made such an impact on even the most challenged students we work with, we are obligated to make sure you at least know.

So check this…here is the *why* behind the madness in our approach:

The Prepineer “Other Disciplines Approach”

Though the exam is divided in to two sections, neither of them are actually individually timed. At the beginning, you are given the full 5 hours and 20 minutes to complete the 110 questions and it is up to you to manage your time accordingly.

I can’t tell you how many students who come to me after having prepared on their own and failed the exam saying this:

“I got slammed on the second half of the exam because I ran out of time, I literally just guessed on the last 15 just to get something down.”

This whole “manage your own time” factor is something that holds no prisoners when it comes to obliterating individual’s test performance.

Don’t let this be your story.

Plan for it and prepare with it.

As far as problems, most questions on the FE Exam will be in the traditional multiple choice format we all have come to love in standardized testing.

However, not all will be and may fall in to any one of the following formats known as Alternate Item Type problems (AIT):

These new Alternative Item Type problems are definitely throwing students for a loop, taking them out of their comfort zone…so the question is:

How many should you expect to see when you sit for their exam?

Like mentioned, most will be in the traditional Multiple Choice format with one correct answer, however, the NCEES has stated that up to 10% of the questions may be of the Alternative Item Type, or AIT.

Doing the math, this then tells us that we can expect to see anywhere from 10-15 AIT problems on whatever discipline specification we choose to tackle.

Ahem, I mean, where these problems will fall…only NCEES will ever know! 🙂

To get more detail on what these Alternative Item Type problems are all about and how you should go about preparing for them, check out this little resource page we put together for you right here:

Ok, got it...what about the scoring?

The scoring of the exam is fairly straight forward…binary, black and white…you either got it right, or you didn’t.

It was always nice of our professors to give us that partial credit for illustrating our work, but…

On the FE Exam, there is no partial credit given, that’s life…we either know something or we don’t.

Then we must be able to take in resources, they've got to at least allow a 3x5 card right?

I know we all went through college learning how to write exquisitely in size 2 font on that 3×5 card, trying to fit as much information as humanly possible, but…

The Engineer In Training Exam is a closed book exam, however…

We are given an electronic version of what is called the NCEES reference handbook.

It may not seem so, but this little reference handbook is pure gold, providing us a wide range of engineering information, including commonly used equations, unit conversions, and miscellaneous engineering tables.

Most students won’t even take advantage of this nugget, but we will make sure you do, preaching it from the mountain tops, so hear us out:

Get used to CTRL+F’ing this bad boy early and often as you prepare for the FE Exam, it will be a solid lifeline when you are most stumped.

At Prepineer, we prepare all of our material reviews, practice problems, cram sessions, and video lessons referencing back to the most current version of the NCEES Reference Handbook. We want it to become second nature for you to read a problem, identify keywords, and know instantly what material you are dealing with and where you need to go to find it’s associated formulas.

So don’t neglect the use of this nugget while you study.

You can download the most recent version of the NCEES Reference Handbook for free through your MyNCEES account…here is a walkthrough of how to do that:

So here you are, now in the know what the FE Exam is all about.

But maybe you are still asking…

Why the Engineer In Training Exam?

I will save the oration for another time, but here are my general thoughts.

You spent at minimum 4 years (probably more) getting that degree of yours, why surf the world of cubicles until you retire.

Many people do, and if that’s your choice, I respect that.

But many of you don’t want this to be your story, you just feel stuck.

Stuck behind fear of failing.

Stuck behind supervisors you feel are holding you down.

Whatever it is that is holding you back, just know that all it takes is one simple step in a direction you deep down want to go that can change it all.

Rome wasn’t built in a day.

You didn’t get your Engineering degree in a week.

It took commitment to get where you are, and that’s what it will take to make this a reality in your life.

Commitment to turn from limiting beliefs.

Commitment to telling yourself you are more than just an employee.

Commitment to accepting that progress in life will be uncomfortable.

It was never meant to be easy.

Becoming a Professional Engineer is hard…but it is what all engineers should be aiming for.

It’s liberating both personally and professionally.

The doors it will open can’t even be projected.

Engineers that were once thinking the same thoughts you are took that first step and are now making amazing impacts around the world every single day.

But it all starts with passing the EIT Exam and becoming an Engineer in Training.

Don’t let the fact that you have been out of school for years or have already attempted and failed hold you back.

We’ve seen it play out time after time, students who have come in to Prepineer with these doubts but are able to *defy their own odds* and go on to pass the exam with flying colors.

This can be your story.

I am confident in saying that.