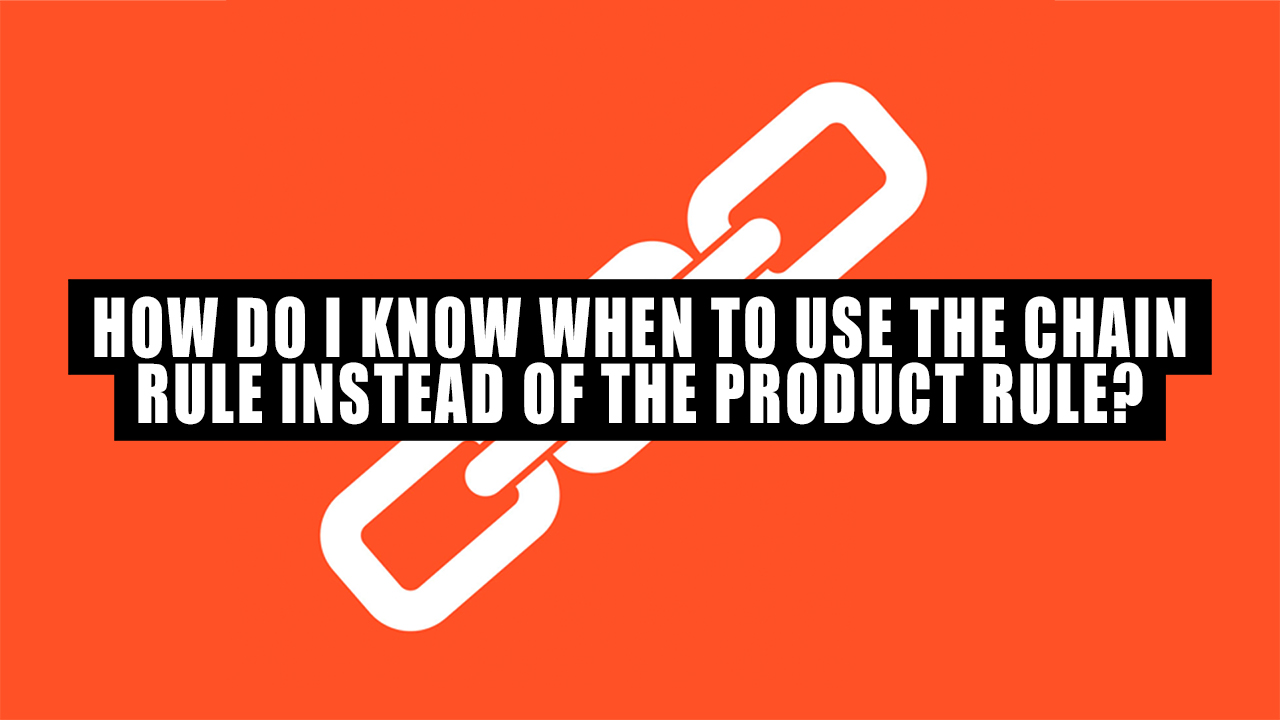 A common clarification I am often asked to make by our students in Prepineer when they are learning the Chain Rule for derivatives is this:

How do I know when I should be using the Chain Rule for Derivatives instead of the Product Rule?

In short, we would use the Chain Rule when we are asked to find the derivative of function that is a composition of two functions, or in other terms, when we are dealing with a function within a function.

To illustrate this, if we were asked to differentiate the function:

On the other hand, we will use the Product Rule when we are asked to find the derivative of a function that is a product of two functions.

For example, we would turn to the Product Rule if we were asked to differentiate the function:

Now, though this explanation usually clears it up for folks (and maybe a few derivative practice problems), sometimes under timed conditions it is difficult to recall on the fly, therefore, let me include my ultimate fall back just for reinforcement.

If I was to plug in a number for the unknown variable and solved, what would the last operation I do be?

This will tell you which way you would need to go in differentiation…let me explain.

We all know PEMDAS, the tried and trued acronym that helps us navigate our order of operations…it lays out like this:

When determining which way to go in differentiation of the more complex functions, we can essentially disregard the AS in PEMDAS as we know that expressions that are added (or subtracted) can be handled separately…these are individual terms.

For example, say we have the function:

So no matter how complex a function looks, we always differentiate term by term.

With that being stated…

In order to determine whether we should us the Product Rule or the Chain Rule, we need to focus on the PEMD for each term and ask ourselves what operation will we be doing last.

If we will be raising to a power, then we will be using the Chain Rule.

If we will be multiplying two variable expressions, then we will use the Product Rule.

Let’s illustrate this a bit further…say we are given the function:

We can quickly determine visually which route to go when differentiating by doing a quick PEMD analysis.

On the other hand, if we were presented a function such as:

And ran through our PEMD analysis, we would determine that the last order of operation (had we substituted a constant for t) would be to raise the expression by 50.

Therefore, we would use the Chain Rule because the last order of operation ends up being a composition of two functions (we completed what was inside and then completed one last calculation based on the exponent).

So what does the NCEES give us as far as carrying out the process of using the Chain Rule or the Product Rule for differentiation?

When it comes to carrying out each respective differentiation (using the Chain Rule or the Product Rule), I wish I could point you to a specific section in the NCEES Reference Handbook that has it clearly defined.

If you were to CTRL+F either of the terms you would come up with zilch.

However, they are presented to us, though not very user friendly, the NCEES does provide some insight.

Both the Chain Rule and the Product Rule can be found on Page 34 of the NCEES Reference Handbook as a first line reinforcement because as we see, there is a lot of good information provided for us: 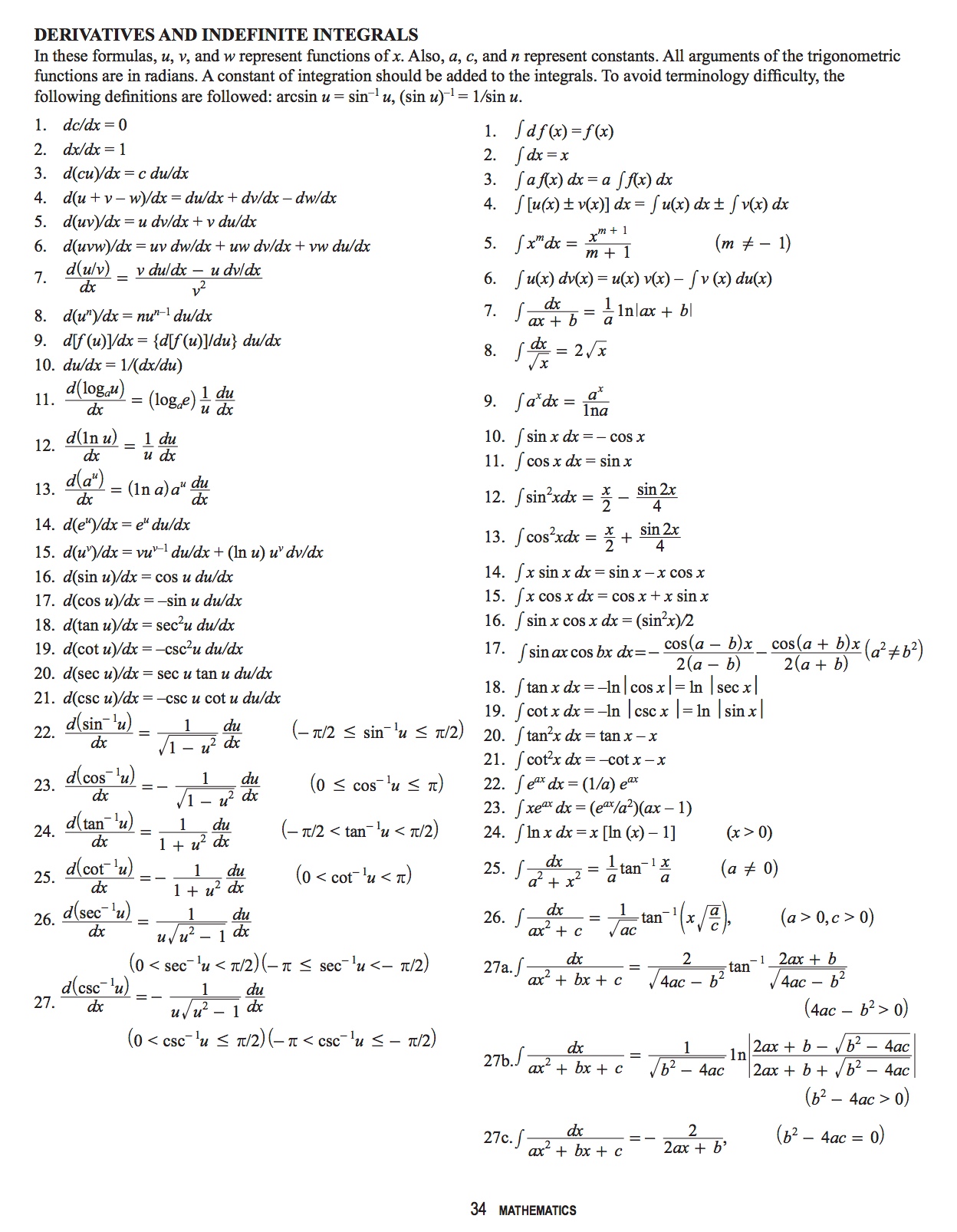 However, it is very hard to decipher in plain english what each formula is telling us here.

If we hone in on this section right here: 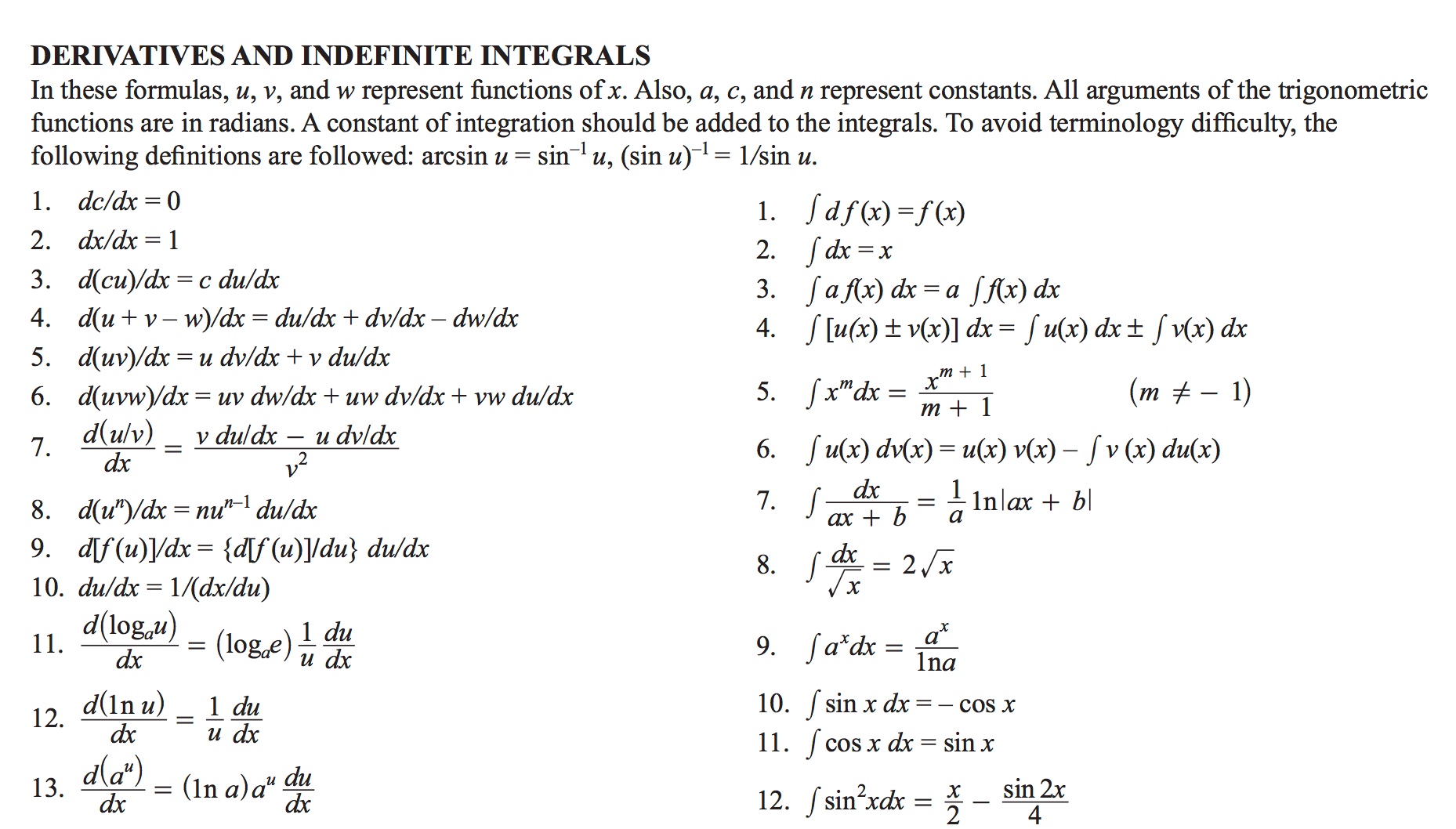 I can tell you that both the Product Rule and the Chain Rule are presented and outline exactly how you would go about carrying out the differentiation of a function.

But who can make sense of any of this mess, certainly not me.

As it is presented in the left column, line items 5 and 6 represent the Product Rule while item 9 represents the Chain Rule. 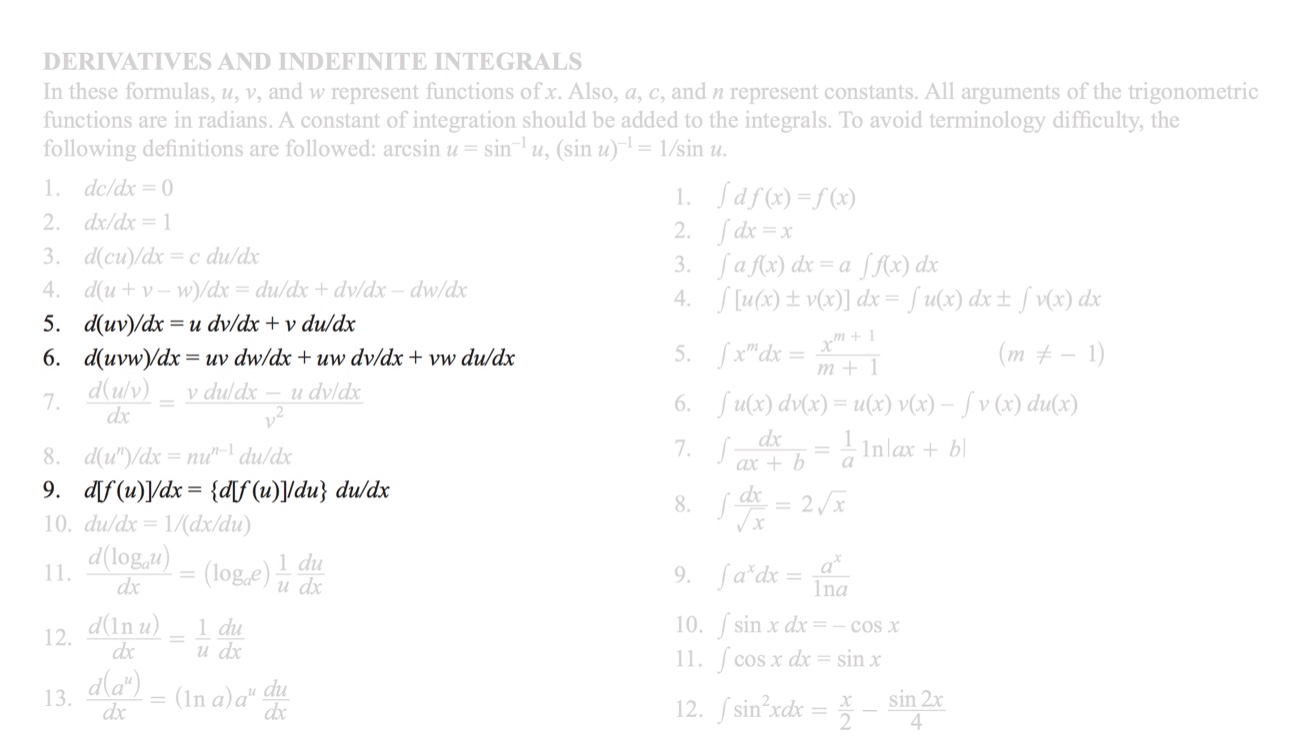 Focusing in on this information, we can see that for the Product Rule, it is illustrating the function on the left side as we would expect, a product.

I am not a huge fan of the way they write it, so instead of displaying as you see here in the NCEES Reference Handbook, it could equivalently be presented as:

When we are to use the Product Rule on a particular function, the right side illustrates how we would go about carrying it out.

That’s how I like to recall it on the fly.

What about the Chain Rule for derivatives?

Looking at the left side of the Chain Rule, it is so conveniently presented as:

When we are to use the Chain Rule on a particular function, the right side will again illustrate how we would go about carrying it out, in this instance:

And that’s how I make sense of it.

1. If we are asked to find the derivative of a function within a function then we use the Chain Rule…which boils down to:

2. If we are asked to find the derivative of a function that is a product of two functions then we use the Product Rule which is simply:

3. If you are unable to determine which way to go, ask yourself:

If I was to plug in a number for the unknown variable and solved, what would the last operation I do be?

This is one of those concepts that can make or break your results on the FE Exam. It’s not that it is difficult beyond measure, it’s just that it falls in to the category of being a potential *time killer*.

And we can’t have none of that.

In our program Prepineer, we believe in the theory of *sets and reps*.

If this is a concept that is consistently tripping you up (derivatives in general), then spending an hour just *repping* through exercises to help you identify quicker is going to return much more value than what you put in.

So with all of this, let’s work.

As always, with love, Prepineer