[latexpage]
It is appropriate that we start off by establishing the universal coordinate system used throughout this chapter, basic, yet crucial to our success to any degree.

The x-axis runs left to right, divided by a y-axis that runs up and down, forming an Origin at the point of contact between the two lines. To the right and above this origin, on the x-axis and y-axis respectively, is considered to be positive territory. Running to the left and down, on the x-axis and y-axis respectively, we consider this to be negative territory.

It is the basic standard to run the scale of each axis in the same magnitude. In that I am mean for 1 unit of x, you have 1 unit of y so that a line running from the origin to any point with an equal x and y value (i.e. 3,3) is at a 45 degree angle to the x and y axis respectively.

However, often times, the problems we analyze are not basic, and the (x,y) coordinates are defined to fit our given constraints. For example, say your buddies are analyzing your flight through the air as you launch yourself off a sweet mo-ped jump. Running from left to right they may define your flight with an x-axis defined by time, t (time) as opposed to x, in 1 sec intervals. The y-axis would be denoted with an h (height) rather than a y and divided into 5 ft intervals. This (t,h) coordinate system is the same as the (x,y), just tweaked to fit your unique situation. 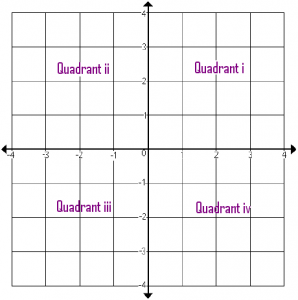 While analyzing problems, it is common to want to know what the distance is between two points in a given plane. Given two points, say A(4,2) and A(6,3), we can determine both what the horizontal distance and the vertical distance is between these points. We commonly hear this as the “change in x” or “change in y”, more formally notated as $\Delta x$ and $\Delta y$, delta being a greek letter meaning “change in”. Using the points given, the $\Delta x=6-4=2$ and the $\Delta y=3-2=1$ which leads us to our first general formula for the “change in x” and “change in y” when given two points $A(x_1,y_1)$ and $B(x_2,y_2)$.

A real number is a number whose square is a positive number. As an example, the $\sqrt{16}$ is equal to 4, this is real.

On the other hand, an imaginary number is one that has a square that is negative. In each case, the number is reduced to the form:

For example, $\sqrt{-16}$ is an imaginary number and can be written as 4i. This is done by taking the square root of 16 to be 4 (a real number) and leaving the basis of the imaginary number $\sqrt{-1}$, simplified to i.

We need many constants to keep track of the multiple variables we have in our real world analysis. A constant is a quantity whose value remains unchanged. Constants can be both numerical and arbitrary. A numerical constant is absolute and maintains it’s value throughout the entirety of a problem, i.e. 1, 2, 7, etc.

On the other hand, an arbitrary constant is one which can be assigned an unlimited set of numerical values which are retained throughout the analysis. To help in organizing and tracking these arbitrary constants throughout our work, it is a must that we denote them using letters, often using primes and/or subscripts to give us more options. For example:

all these are different constants.

There are two values of the variable x that satisfy the general form equation. These solutions, denoted as $x_1$ and $x_2$ , are known as roots, and may or may not be distinct and/or real. We can solve for these roots using the following equation:

The term $\sqrt{b^2-4ac$ in the equation above is better known as the discriminant, often times denoted with a $\Delta$ , not to be confused with the term “change in” as defined in a previous section. To get an idea of what roots we are working with, we can use the discriminant:

Moving on with our roots:

Using these two terms and proofing the Quadratic, we can rewrite the equation as such:

A good practice and to better understand how equations are derived, you can multiply out the right hand side and substitute for the terms $x_1+x_2$ and $x_1,x_2$ as defined above.

Using the discriminant rules stated above, the quadratic can be rewritten:

It’s been a while, let’s hit that dictionary again.  A variable is a quantity that has an unlimited amount of values that can be assigned.  In many cases, the infinite possibilities of a variable are bracketed within a set of limits.  You are probably more familiar with seeing these limits proposed as inequalities:

To include -4 and 3 as possibilities within the limits, you would see the inequality stated as the following,

You can also have a combination of the limits, one end being “less than”, while the other end can be “greater than or equal to”, that would appear as the following,

For the most part, in Engineering we deal with equations with two or more variables.

We can deem a multivariable equation solved when we are able to satisfy the equation by plugging in a given set of values for the unknown variables.

An equation can be either algebraic or transcendental, the difference being, an algebraic equation, of how ever many variables, can be simplified down into the form $ax^my^nz^p$ , where a is a constant and m, n, and p are all positive numbers or zero.

The degree of the algebraic equation can be determined by noting the highest degree within the equation.  The equations above are 5th degree and 6th degree equations respectively.

An equation that can’t be simplified down in to the form $ax^my^nz^p$ is known as a transcendental equation.  Examples of these types of equations are $y=sinx$, $logy=3x$ , and $y=2^x$.

I will always remember my High School pre calculus teacher educating me with the delightful story of the Indian Tribesman Soh Cah Toa.  The story is a long, detailed analysis of a powerful leader to a massive tribe in Middle America.  In a nutshell though, Soh Cah Toa dominated to all lengths and from all different angles, and he is coincidentally tied to all the fundamental equations derived from a right triangle. 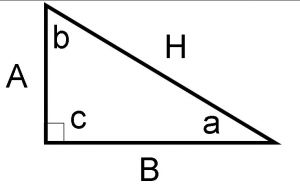 So just remember Soh Cah Toa, it will lead you to the following fundamental right triangle equations:

An angle can be measured in two different ways:

Circular: The unit angle is an angle whose subtending arc is equal to the radius of that arc, and is called a radian.

The relationship between the two measurements is:

If you are asked or need to convert from one measurement to another, the following equations will do the job: